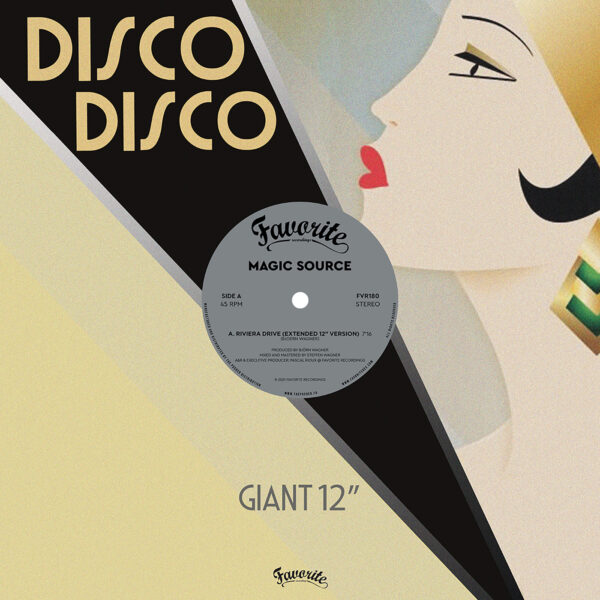 Favorite Recordings proudly presents the new 12″ of Magic Source. The all-star group around producer Björn Wagner (known also for his cosmic and tropical-flavoured disco music as Bacao Rhythm & Steel Band and The Mighty Mocambos) creates here a hypnotic four-on-the-floor sound that is both earthy and spaced out and all their own.

Recorded on 16 track analogue tape with inexpensive vintage gear, the crew explores the more unusual facets of disco music off the beaten track in favour of more otherwordly and international stylings. In their music, one could hear echoes from lost tropical disco records, cinematic flavors from library soundtracks and a healthy dose of DIY garage funk rawness.

On A side, “Riviera Drive” is an extended Mediterranean disco groove based on hypnotic percussions and soulful horn themes that alternate with trippy keyboard excursions. The tune is equally at ease on the dancefloor as in a chill-out zone, but of course, prefers to be in its natural habitat in a classic car somewhere between Nice and Monaco.

On the flip, Tom Tom Club’s “Genius Of Love” is reimagined as a jazzy yacht soul instrumental with an echoed flute taking the lead. You’ll also find a shorter Radio Edit of “Rivieria Drive”.