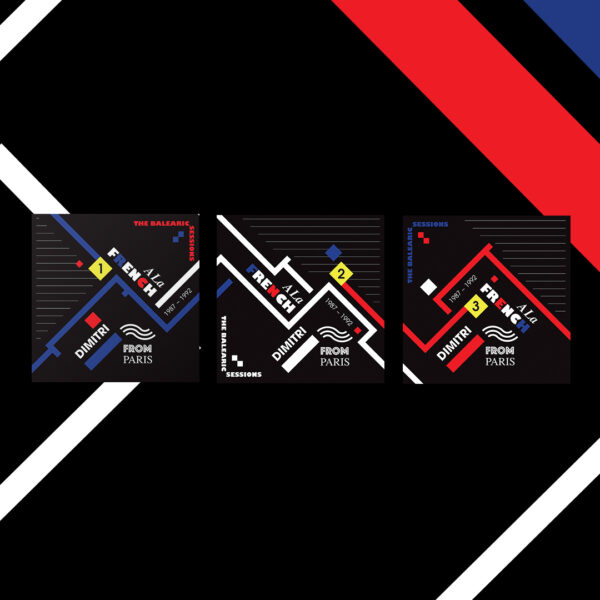 Favorite Recordings and Jazzy Couscous proudly present a series of three EP’s A La French – The Balearic Sessions with early remixes works for french artists by the one and only Dimitri from Paris.
This project is a long overdue reminder and tribute of Dimitri’s career’s beginnings, a selection of less-known works with a balearic style and a distinctive French flair. It tells the story of an 80’s kid who, through his love of music and remix culture, helped put together the first pieces of what would later become the French House scene by spreading his love for Garage House and Club Music in general. All tracks have been remastered from the tapes and will be available as a series of three 12″ Vinyl with Printed Innersleeve.

The year is 1986. There is close to no remix culture in France and only a handful of pioneers are into this new club sound coming mostly from USA. At the time, Dimitri starts experimenting with homemade remixes, done by cutting tape, inspired by New York producers Tony Humpries and Shep Pettibone. Dimitri starts playing his remixes at radio and his work gets noticed. Starting his own radioshow “NRJ Club – The Sound of New York“, Dimitri’s audience quickly became bigger. His remix style starts to settle, and the requests start piling up: Stephanie De Monaco, Gerard Blanc, Elsa, Etienne Daho, Marc Lavoine…Many French pop stars come knocking on Dimitri’s door to get a club remix of their latest hit. At this time, Dimitri often works with the same sound engineer: Jean-Philippe Bonichon aka JPB. Together, they will shape the club remix sound of the late 80’s France unlike anyone else, heavily influenced by superstar remixers like François K, Shep Pettibone, Larry Levan, Frankie Knuckles, or even Stock, Aitken & Waterman. In the early 90’s, the remixes he produces are infused with Garage House, Balearic vibes & a modern Rare Groove vibe popularized by UK remixers such as Coldcut or CJ Mackintosh, something quite unique in the French musical output at the time.

Through his radio and remix work, Dimitri unknowingly laid down the fundamentals and planted the seeds for what would later be known as the “French Touch” scene. There is indeed a straight filiation between some of the artists representing the French Touch from 1995/1996, and Dimitri. He ultimately showed France had nothing to be ashamed of, and in the process, helped to spread a historic U.S. club sound and to consolidate its associated culture in his country.

Available on our Bandcamp.