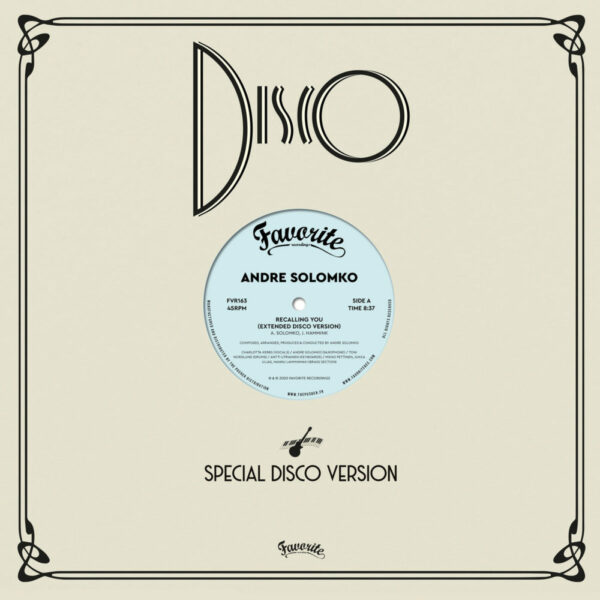 Born in Ukraine and based in Finland for a while, Andre Solomko is a rich and engaging personality, but above all, a talented saxophonist, composer and engineer, with contagious passion. Since they met 7 years ago, Andre and Pascal Rioux’s (founder of Favorite Recordings) collaboration resulted in 3 albums and a couple of singles acclaimed internationally. Primarily known for a sound mixing Jazz-Funk, with European Soundtracks, Pop and Soul influences, Andre Solomko’s skills for composition and production are much wider. Almost 2 years ago, he’s therefore demonstrated his versatility when delivering the hot Disco anthem “Le Premier Disco Sans Toi”.

This first attempt definitely seduced many DJs and collectors, and it seems Andre enjoyed the trip too and decided to embark for it again with “Recalling You”. For this new single, Andre’s idea was to revive two of his past compositions, tailoring brand new glamorous Disco suit and arrangements for it. Backed again by a close team of musicians and the beautiful and charming vocals of Charlotta Kerbs, the new session was recorded live and analog as usual, and then brilliantly mixed in France by Jordan Kouby at Question de Son studios. It ended with what might be Andre Solomko’s best level of productions and sound so far.

To make it short, “I Recall” and “Teasing You” fell in love and had a baby at the nightclub… here comes Recalling You, packed in a 45rpm 12inch vinyl edition and coming with a hot Dub edit by Charles Maurice on B-side.