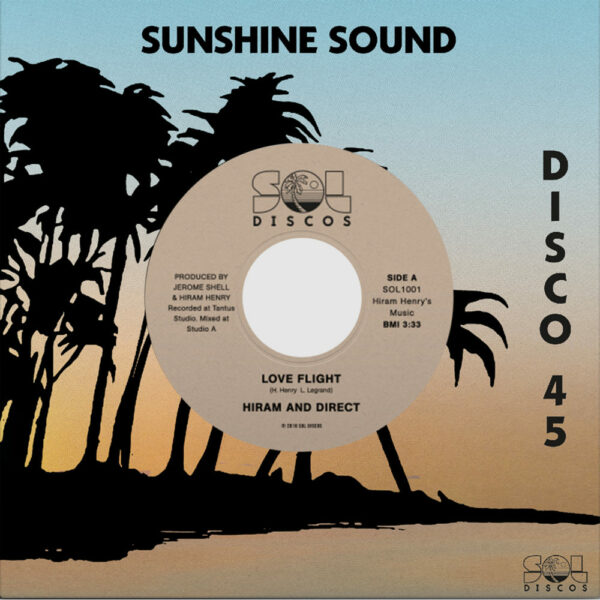 Favorite Recordings presents this new single reissue released by SOL Discos, a new sub-label launched as a partnership between Pascal Rioux and DJ Waxist. Following their recent collaboration on projects like Lamar Thomas’ single and Caribbean Disco Boogie Sounds’ compilation reissues, Favorite Recordings offered the French DJ to become the coordinator and A&R of a new imprint aiming to reissue rare and forgotten music with a Tropical and Disco flavor: “Sunshine Music”…

Today, SOL Discos is delighted to introduce its very first release, with this official 7″ reissue of Hiram & Direct. Initially recorded and released in Detroit (Michigan), it has been a hard to find record since then, with only a little number of known copies floating around and changing hands within the Soul collectors / DJ scene.

Musically speaking, the reissue has been switching tracks sides from the original release, putting the focus on “Love Flight” as the A side. Indeed, “Love Flight” has some strong dancefloor potential for any DJ into underground Disco & Modern Soul. Just listen to those synths! On the B side, you will find a different vibe with “Turn It Around”, an excellent ballad with beautiful vocals & harmonies. In the end, both tracks have nothing to envy to some of the best Soul classics.

It’s with great pleasure and honors that SOL Discos and Waxist make this little known gem more accessible to today’s music’ enthusiasts, through this legit reissue!