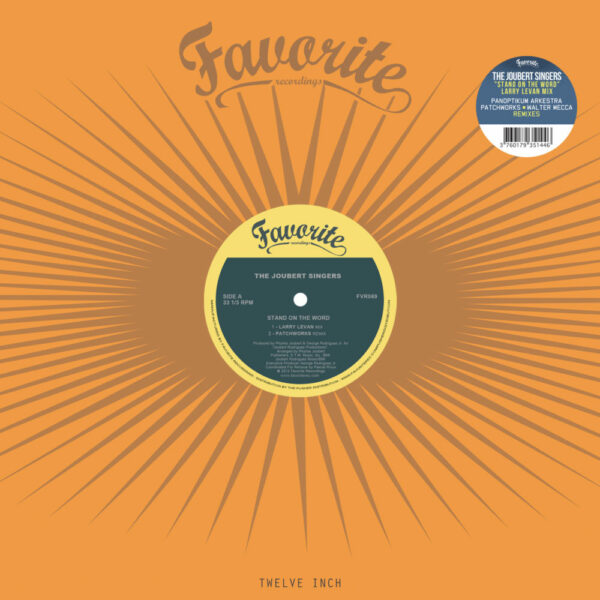 Originally recorded live in the First Baptist Church in Crown Heights, NYC, in 1982 under Celestial Choir and pressed only for the congregation, it was first enlighted by Walter Gibbons, who acquired a copy and played it out at the 7th av. Rock and Soul shop, where he worked.

The Joubert Singers’ version is a re-recording done for Next Plateau, featuring the same singers but done outside of the church choir. It has been recently officially reissued on Favorite Recordings (FVR067), as it was originally.

Favorite now follows-up with this new 12inch, including the famous Larry Levan Mix and new brilliant and unique remixes. It was obvious to ask Patchworks for it, considering his longtime career on the label and his famous Disco/Funk skills. Following their recent remix for The Dynamics as 7 Samurai, we could not refuse the Austrian top duo producer also known as Panoptikum Arkestra, when they told us it was one of their favorite track ever… Last but not least, young Parisian talented beatmaker Walter Mecca, who’s signed on the label, was the perfect idea to create a contemporary Hip-Hop/Funk rendition of this classic.

As for the Larry Levan Mix story, it seems he was far too busy inventorying his large collection of flashlight and torches, and would not have had time to spare to do a remix. The only reason this was written on the bootleg released few years ago, is because Larry was massively playing the original Celestial Choir’s version in clubs. At the end, it was an excellent sounding pressing of an impossibly rare LP track that had never sounded as clear or dynamic as on this version.

Released on 12inch on April 23rd 2012.
THE JOUBERT SINGERS – STAND ON THE WORD (PATCHWORKS REMIX)