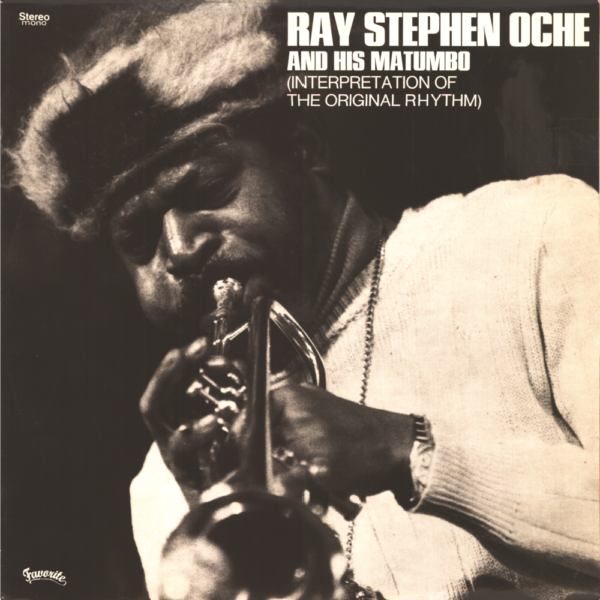 Ray Stephen Oche is a singer, drummer, flutist and mainly trumpet player from Nigeria. From the late 50s he spent time in Ghana, meeting famous drummer Guy Warren “who is supposed to have deliver him the secret of the authentic african rythms”, toured in Sierra Leone with “Outer Space” band, went to Senegal and Gambia.

Matumbo, name of his band on this record means in Angolese language, “gifted with various talents”. This LP has been recorded in Paris with musicians from Congo, Togo, Guinea, Gambia, but also Brazil and “french” West Indies. The whole album is roots and groovy afrojazz, full of percussions and african singing (in Idoma language).

Even though this record is very hard-to-find, it shouldn’t stop it from being very high on everybody’s wishlist. Enjoy!

Born on June 28 1936, in Edikwu Village, Oturkpo, Idoma Division, Benue Plateau State, Nigeria, Ray Stephen Oche comes from a family of musicians, singers and flute players. His ancestors and folks were undisputed celebrities in the many music festivals of his native region, especially in the 30’s, and Ray just followed with amazing ease and talent, the path they had so gloriously thread.

From the tender age of 8, Ray was already an outstanding flute player in his village school band. Soon after, Ray joined local bands and became a first rate Obinde singer and started travelling extensively, visiting every part of Northern Nigeria, where he entertained Idoma communities.

In 1953, Ray arrived in Lagos and quickly found his way into the best musician’s circles, joining Stephen Amechi‘s and, later on, Bobby Benson‘s groups. Shortly after he found his own band, Ray Stephen Oche & His Orchestra, and quickly performed in Kano, Kaduna, Ilorin, Enugu, Aba, Port Harcourt or Ibadan. Coming back to Lagos, Ray decides to go to Accra (Ghana), where he achieved his musical studies at Ghana Military School of Music and, later, became a favourite of late Kwame N’Krumah. While staying in Accra, Ray met the world famous drummer and percussionist, Guy Warren, who is supposed to have delivered Ray with the secret of the authentic African rhythms.

In March 63, Ray returned to Lagos, where he collaborated with Chris Ajilo & His Cubanos, before forming his own new band, Outter Space, with which he toured Sierra Leone. That’s also where he ended invited to perform a series of private shows for the prime minister. Ray then visited Gambia, Senegal and then Paris, where he arrived in 1965. He and his band performed all over Europe in Switzerland, Spain, Italy, France, etc…

After the memorable “Festival de Montparnasse” in 1970, Ray Stephen Oche joined Alan Silva & His Celestial Communications Orchestra for several shows and festivals. In 1971, he collaborated with Noah Howard Quartet and played for the Copenhagen Radio, the University or the famous “Montpartre Jazz Club”. After having worked successfully in Germany and Holland, Ray came back in Paris where he raised his Freedom Suite Orchestra, this time bringing him to Algeria or Tunisia.

Famous in many Jazz circles and at the SACEM, Ray is now leading the Ray Stephen Oche & His Matumbo (in Angolese language, Matumbo means: “Gifted with various talents”). This band is composed mainly of African musicians from Congo, Togo, Guinea or Gambia, but also with others from Brazil or French West Indians. The band main purpose was to shed more lights on the diversity of African melodies and rhythms.

As a calm, gentle and discrete person, Ray answers very genuinely when questioned about his beliefs: “Of course I believe in God!!” This makes even more sense when you know that his real name, Owoicho Oche, means “God is the King”.

This is the name of a small but prosperous village in Idoma district, rendered uninhabitable by its wicked king Ukpele, who reigned early this century. He was of legendary cruelty and his mean deeds of oppression are still remembered by many Idomas of the present generations. This theme is an excellent adaptation by Ray Stephen Oche, of the traditional music dedicated to the King’s supper. In traditional Idoma’s society, messages of bad news (death, war, etc…), were and are still transmitted from village to village, by horns, or by wailing cries made up of a chain of the vowel U, as exemplified here.

Iwongo was a village’s “beauty”, tall, slim, ravishing, in praise of whom the young mens AJA songs. Her legs were perfect and amongst the Idomas, “Iwongo’s Knee” is like… “Cleopatra’s Nose” for us. Here, Ray Stephen Oche transforms the traditional melody into a modern musical idiom.

It is true indeed that the style of a man is the image of his mind, the choice and command of language are the fruit of experience. In traditional Idoma’s society the elders speak in proverbs, reflecting a colourful oral tradition. The proverb subject of this song translates the fundamental optimism and philosophy of the African: Despair is really inadmissible, even in deepest adversities.

B1. Botala-Boyaka (In Lingala language: Song of Joy And Relaxation) :

A musical piece expressing a feeling of deep enjoyment and complete relaxation, in one of the languages extensively used within Congo.

B2. Daybreak On The Niger :

Ray Stephen Oche transposes in a modern musical idiom, a customary rhythm and melody used in fishing festivals, all along the Niger river.

A special rhythm and melody, which accompanies the king in his official visits. Songs of praise and acclaim are performed by drummers and singers, as the royal procession proceeds on his way.